Is WTI crude oil defined in a new market?

Russian production, the Fed’s decision to raise interest rates and the weakening of the dollar. What other factors are driving crude oil prices these days?

Mid-week black gold gained 5% after rebounding from a 6-month low as a sharper-than-expected decline in US crude inventories offset fears over rising Russian production, export sales and recession fears.

Get the full Ray Dalio series in PDF

Get the entire 10-part series on Ray Dalio in PDF. Save it to your desktop, read it on your tablet, or email it to co-workers

As the S&P 500 fell by a double-digit percentage in the first half, most equity hedge fund managers struggled to keep their heads above water. The performance of the equity hedge fund sector contrasts sharply with that of macro hedge funds, which have recorded one of the best streaks of good performance since the financial crisis. Read more

On the macro side, the greenback pared its gains on Wednesday after the U.S. Central Bank’s July minutes. Indeed, during its monthly meeting, the Fed was more hawkish than expected. This raised concerns among some US central bank officials, who wondered whether the Fed could raise rates too much to regain control of inflation on the one hand, and the need for further hikes on the other.

As I mentioned in my last article published last Thursday, when all the data turns into bearish territory for both legs – the greenback and the black gold – it’s usually optimism (or pessimism, depending the point of view that one adopts) triggered by the macroeconomic outlook that leads the markets. In this case, the news having been rather bullish for the US dollar, it is this that will set the tempo for positively or negatively correlated assets.

US Crude Oil Commercial Reserves surprised the market by falling sharply to -7.056m barrels while expectations showed only a tiny drop (-0.275m barrels).

US crude inventories have thus decreased by more than 7 million barrels in volume, which is a very significant difference showing stronger demand and a strong bullish factor for crude oil prices, since the drop is explained, in part, by the increase in the price of American crude. exports, which more than doubled last week to 5 million barrels per day (mbpd) from 2.1 mbpd.

The drop in commercial reserves is due to strong domestic demand and rising exports as US trading partners seek to compensate for the loss of Russian hydrocarbons.

It is here again that we could witness a lasting increase in demand marked by an unexpected and sudden drop in gasoline reserves, since they have been reduced by four and a half million barrels. Another factor to note is that a few refineries also operated at a lower capacity rate, at 93.5% versus 94.3%.

On the geopolitical scene, the ongoing negotiations around the Iranian nuclear deal, which could allow this major producer to resume its exports, still hover over prices as a bearish factor. However, even a return to the market of Iranian crude oil production would not compensate for the loss of Russian supply. In short, there is little new information on this agreement. 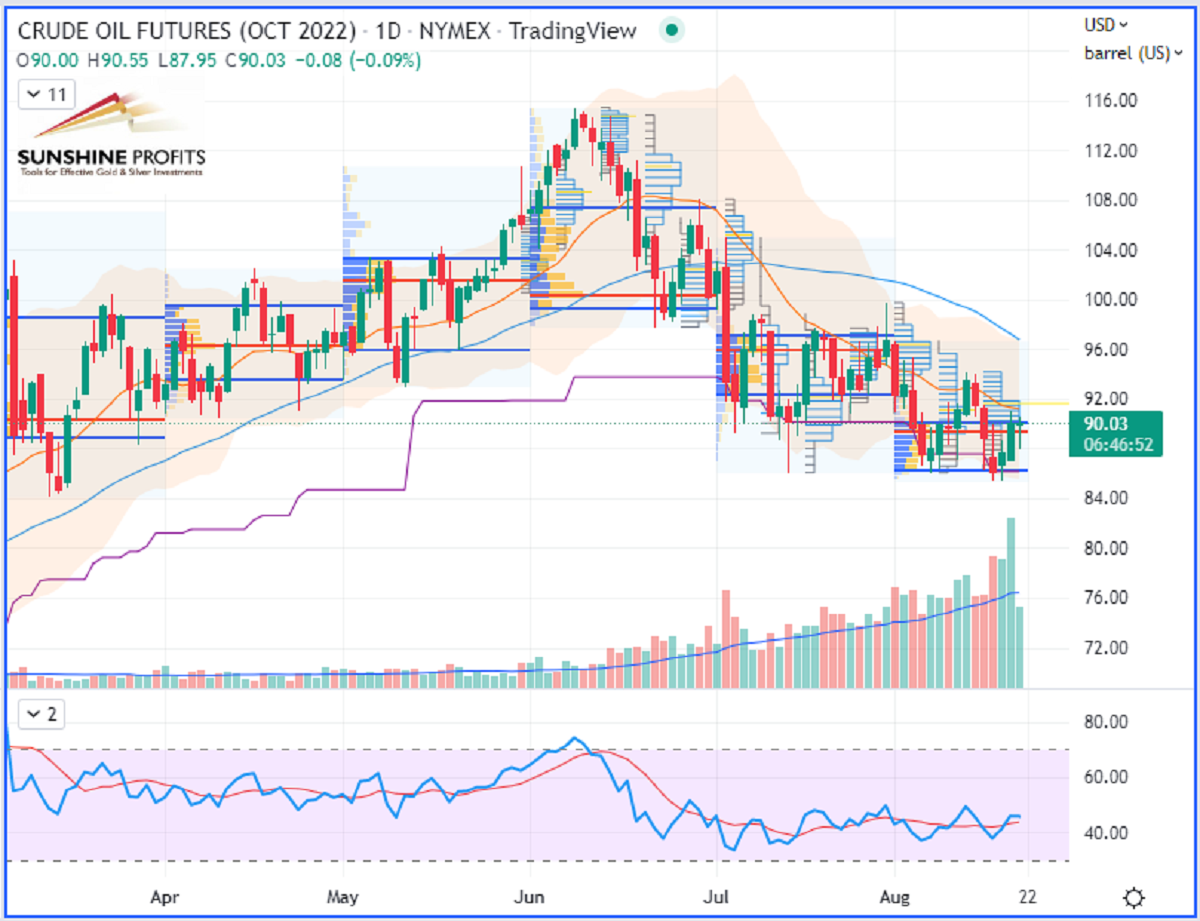 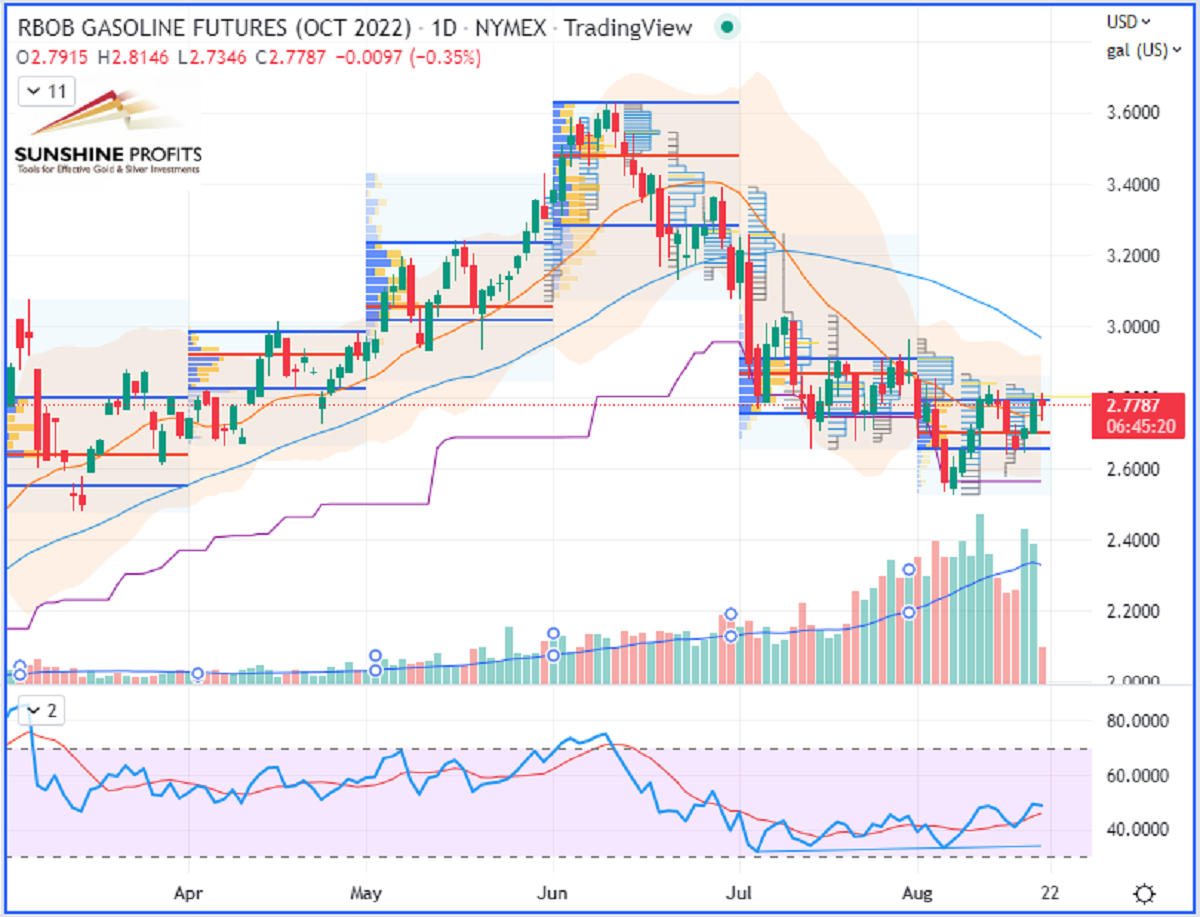 Do you like what you read? Subscribe to our daily newsletter today and you’ll get 7 days FREE access to our premium daily oil trading alerts as well as our other alerts. Sign up for the free newsletter today!

The information above represents the analysis and opinions of Sébastien Bischeri and Sunshine Profits associates only. As such, it may prove to be erroneous and be subject to change without notice. At the time of writing, we base our opinions and analyzes on facts and data from the respective trials and their authors. Although formed on the basis of careful research and sources reputed to be accurate, Sébastien Bischeri and his associates cannot guarantee the accuracy and completeness of the data reported. The notices published above do not recommend or offer any corporate action. Mr. Bischeri is not a registered portfolio adviser. By reading Sébastien Bischeri’s reports, you fully agree that he will not be held responsible for any decisions you make regarding the information provided in these reports. Investing, trading and speculating in all financial markets can involve a high risk of loss. Sébastien Bischeri, Sunshine Profits employees, affiliates and their family members may go long or short in any security, including those mentioned in any of the reports or essays, and may make additional purchases and/or sales of these titles without noticing.

Previous Kazakh president sees no reason to be pessimistic about relations with Moscow
Next Most Likely to 5x First: Lemonade vs. Upstart